skip to main | skip to sidebar

Lamps, the home of Agni 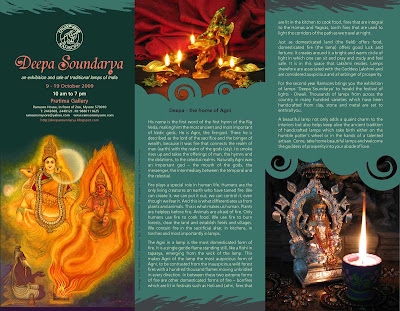 His name is the first word of the first hymn of the Rig Veda, making him the most ancient and most important of Vedic gods. He is Agni, the fire-god. There he is described as the lord of the sacrifice and the bringer of wealth, because it was fire that connects the realm of man (earth) with the realm of the gods (sky). Its smoke rises up and takes the offerings of man, the hymns and the oblations, to the celestial realms. Naturally Agni was an important god – the mouth of the gods, the messenger, the intermediary between the temporal and the celestial.

Fire plays a special role in human life. Humans are the only living creatures on earth who have tamed fire. We can create it, we can put it out, we can control it, even though we fear it. And this is what differentiates us from plants and animals. This is what makes us human. Plants are helpless before fire. Animals are afraid of fire. Only humans use fire to cook food. We use fire to burn forests, clear the land and establish fields and villages. We contain fire in the sacrificial altar, in kitchens, in torches and most importantly in lamps.

The Agni in a lamp is the most domesticated form of fire. It is a single gentle flame standing still, like a Rishi in tapasya, emerging from the wick of the lamp. This makes Agni of the lamp the most auspicious form of Agni, to be contrasted from the inauspicious wild forest fires with a hundred thousand flames moving unbridled in every direction. In between these two extreme forms of fire are other domesticated forms of fire – bonfires which are lit in festivals such as Holi and Lohri, fires that are lit in the kitchen to cook food, fires that are integral to the Homas and Yagnas of the Brahmins, torch fires that are used to light the corridors the path as we travel at night.

Lamps therefore are associated with the Goddess Lakshmi. Just as domesticated land (the field) offers food, domesticated fire (the lamp) offers good luck and fortune. It creates around it a bright and warm circle of light in which one can sit and pray and study and feel safe. It is in this space that Lakshmi resides. In the festival of lamps, a lot of lamps are lit especially in the front of the house so that more light spaces are created to attract Lakshmi.

Traditionally, if a lamp goes out on its own when there is still enough oil, it indicates bad luck, for it means that though man thinks he has domesticated fire, forces greater than man (god? demon?) reject this domestication. They communicate by making the flame flutter and then putting it out completely. The form of the flame in a lamp thus is indicative of fortune. Great pains are taken to ensure the lamp light is still until the last drop of fuel in the lamp. A lamp that helps us do so is the most favored of lamps.
- Devdutt Pattanaik
For the second year Ramsons brings you the exhibition of lamps ‘Deepa Soundarya’ to herald the festival of lights - Diwali. Thousands of lamps from across the country in many hundred varieties which have been handcrafted from clay, stone and metal are set to enthrall you.

A beautiful lamp not only adds a quaint charm to the interiors but also helps keep alive the ancient tradition of handcrafted lamps which take birth either on the humble potter’s wheel or in the hands of a talented artisan. Come, take home beautiful lamps and welcome the goddess of prosperity into your abode of love.
Posted by H.S. Dharmendra at 8:06 AM

Dear reader, welcome, I am glad to have you here. As the text in the banner says, this blog is a window into the world of Indian lamps. In India, worship is incomplete without a traditional oil lamp. Innumerable varieties of lamps are created in various media in the sub-continent. I have tried to give concise information on lamps as well as the annual exhibition of lamps. Please feel free to comment. I would be glad to answer any of your queries or doubts. If there are any mistakes please bring it to my knowledge. Thank you. Enjoy reading.